There are few things that Know Your Grinder likes on evening more than a good old knuckle-dusting between our favorite coffee grinders.

This time it is a strictly family affair, with four of the leading models made by Baratza, one of the leading names in coffee grinding.  We’ve got the Encore, the Virtuoso, the Vario, and the Virtuoso Preciso all waiting in the wings to rumble.

Because this could get kind of hectic and a bit messy, we’ve divided it up into subheadings, namely

Know Your Grinder has not gone as far as trying to compare the baby of the piece, the Encore, with the resident tough guy, the Vario, as we feel it would not be an evenly matched fight.

Firstly, a few words about each of our contestants. 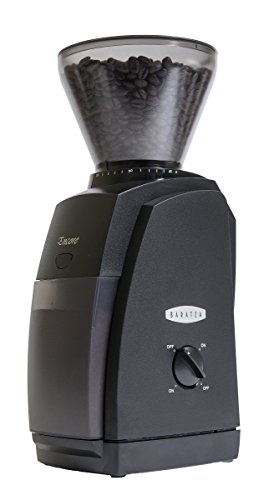 The lowest priced of the four, the Encore remains a steadfast contender and a good all rounder entry level grinder.  Anyone wishing to have a high quality burr grinder but all for under $150 would be well advised to start here.

As you would expect, in terms of speed this is not going to win the fight, but as a decent basic model, it still has a good range of grinds (40) and to impressive standards.

A few gripes about longevity aside, a high percentage of customers are impressed with the overall user experience that this produces and that is good enough for us.

Here’s a video review of the Baratza Encore, to give you a closer look at this particular entry-level model of electric burr coffee grinder.

=> Click here to read our full review of the Baratza Encore 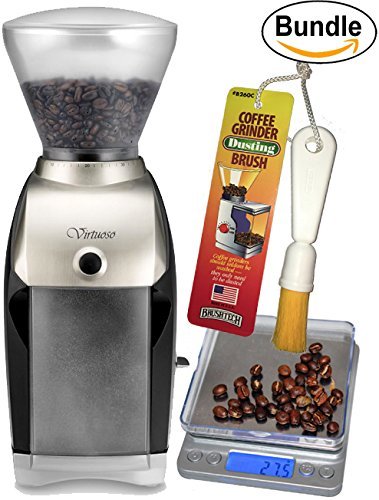 Billed as a professional grade grinder, this is our second model and is reasonably priced for the quality level.

It is faster to grind and in taste tests scores decently in a range of different coffee grind types.

One of its main edges over its competitors is its ease of use. The evenness of the press pot grind is high and it is definitely a serious contender!

Here now is a video of the Baratza Virtuoso to get you acquainted with this particular model of burr grinder.

=> Click here to read our full review of the Baratza Virtuoso

If it is a wide selection of grind sizes you are looking for, then look no further than here, because the Preciso is queen of the micro-adjustments.

An offshoot of the Virtuoso line of Baratza grinders, this baby has 440 different grind settings and all the experimenting you could wish for.

If you plump for this mid range grinder, you will have all the finesse of the more expensive model, but for under $300.

It is highly professional and will not let you down, doing everything from coarse grinds to an exceptional espresso (for which it is highly recommended).

The only downside is the potential maintenance issues.

Check out this video once again by our friends at Prima Coffee, and you will see that the Preciso means business when it comes to grinding coffee. 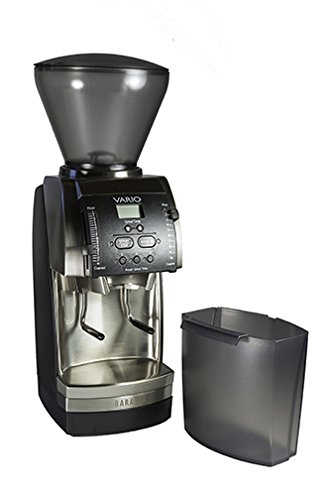 The crème de la crème – this is “prosumer” model, with a price tag to match, for those who are willing to pursue the ideal of perfection and don’t mind paying for it either.

Decidedly, not for amateurs, this does everything you could want and more and does it extremely well.

If you are a fan of all types of coffee, from espresso, to drip, to French Press, the Vario 886 is designed to handle them all with ease.  For the hardcore coffee buff that will accept nothing less than the best.

With a clear $100 in price difference, it would probably be a bit unfair to be expecting the Encore to perform at exactly the same level as the Virtuoso, it’s slightly more sophisticated sibling.

Yes, the Virtuoso is faster and looks impressive. But in actual fact, this pair have more in common than apart. They weigh the same, both have the same number of grind settings and can be used across a wide range of coffee grind styles.

If money is a consideration, Know Your Grinder feels you could do worse than plump for the Encore, as a decent entry level compromise, but if finesse of grinds is more a priority, then do shell out the extra for the Virtuoso.

Firmly in the middle ground we here have the Virtuoso and the Preciso. Both are priced around the same amount, with the Preciso being only about $70 more.

However, the Preciso offers a hugely different amount of grinds (440 versus the Virtuoso’s 40).  If playing around with grind settings is your thing, then you should definitely consider the Preciso, because chances are you’ll acquire the skills to make a wider variety of coffee drinks.

In terms of satisfaction, the Preciso scores more highly, but in terms of ease of use, the Virtuoso comes into its own, proving far easier to handle than any of the competitors.

Perhaps, at a first glance, this would seem a little unevenly matched as a contest.  After all, despite being a professional level grinder, the Virtuoso is priced under $250, whilst the Vario getting close to double the price.

There is no doubt that the Vario is the machine to go for espressos of truly outstanding quality and in terms of grind consistency and quality, scores highly.

But when you consider the fact the Virtuoso is nearly half the price, then the scores for evenness, speed, consistency and so on, do start to measure up favorably.  It only falls a little way short of the Vario’s standard we feel. And the ease of use is still superior to the more expensive Vario.

Well here we get to the crux of the issue. Baratza’s two heaviest hitters go head to head in the all important challenge.

Important, then, to remember some facts. Despite being priced nearly $200 less, the Preciso has two hundred plus extra settings than the Vario.

The Vario is a 54MM compared to the Preciso’s 40MM and the former is a flat burr, not a conical one.

In terms of grinding speed, the lower priced Preciso, has the advantage.  Also in terms of evenness of press pot grinds, it impressed judges more than its more expensive counterpart the Vario.

In other tests, it held up remarkably well against the Vario, but ultimately, Know Your Grinder feels the Vario has the edge as a best all rounder and is definitely the go to model for the enthusiast for whom money is not a problem.

However, if you wish to get roughly 90% of the quality for almost half the price, then in terms of value for money the crown would go to the Preciso.

SOME MORE POINTS TO CONSIDER

WHAT IS OUR CONCLUSION?

All four have their virtues. The Encore is the choice for cheap and decent grinders under the $150 mark.

The Preciso is a great grinder with an outstanding reputation for espresso, so espresso lovers on a medium budget should look here first.

But in terms of pure quality, the Vario is the undisputed champion.

However, for value, the Virtuoso may well be worth a shot.