People like to joke around about how taking your coffee this way or that way says something about your personality, and now there’s scientific evidence to back this up.

Basically, it boils down to this – the next time your co-worker orders black coffee, don’t overreact, but… RUN!  RUN LIKE HELL!  That guy is probably a psychopath. Similarly, when your date prefers to drink black coffee, it might be time to say “Oh, look at the time!  Gotta go…” and take the cab home immediately.

In a similar vein, when interviewing for a job and you notice people around you are taking black coffee, you may just want to resign then and there, or at least investigate how people there drink their coffee.  Of course, you may look a little crazy yourself leering into people’s coffee cups and saying “<insert awkward laughter> Umm hey did you put any sugar in that cup of coffee?  Oh no reason, just wondering!” 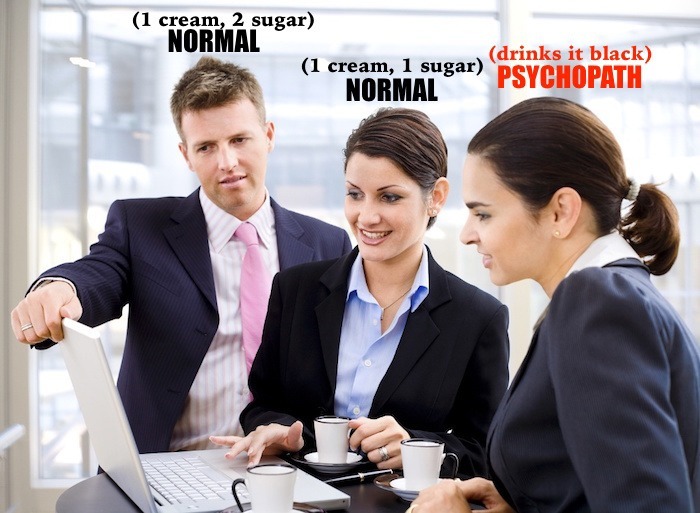 The study itself comes from the University of Innsbruck in Austria, and was facilitated by a pair of psychology researchers, Tobias Greitemeyer and Christina Sagioglou. The researchers handed questionnaires to two separate groups: prison inmates and students.

According to the study, a taste for bitter drinks and food can be linked to traits such as everyday sadism and psychopathy. About 1000 people were examined during the research.

Christina and Tobias asked participants to fill out questionnaires inquiring about their food preferences. Those who preferred black coffee got higher scores on the questionnaires, which mainly assessed Machiavellianism, a term that describes psychopathic, sadistic, narcissistic, and dark personalities.

Hey, would you mind filling out a survey?

The study shows that apart from black coffee, other bitter foods such as tonic water, radishes, and celery are also linked to malevolent behaviours.

But on the other hand, folks who preferred sweet tastes were found to be more agreeable. According to another study carried out in 2012, by The Journal of Nutrition, humans have a taste for sweet food because it provides essential nutrients as well as energy.

Although some people like bitter things, research shows that bitter-tasting drink and food may bring about interpersonal hostility and harsher moral judgments.

A good number folks prefer the opposite: sweet foods. According to yet another study, such people avoid bitter foods mostly because they have been linked to toxins.

According to researchers, this study is just the beginning when it comes to determining connections between personality traits and eating behavior.  Further research will shed more light.

Some people say they prefer taking their coffee black because cream, sugar, and other flavourings contain a lot of calories. Likely story!

How To Cozy Up To A Psychopath

If you happen to know any psychopaths, you have two options: get rid of them or win their favour. The latter is certainly easier compared to the former.

For instance, if you see your significant other doing the following (see video below) , you might want to take note if they were drinking any black coffee previous to their episode.

Of course, antisocial behaviour is a little different than randomly crying for no reason.  Still, there could be a correlation, and it never hurts to ask, right?  (Just kidding, it might hurt to ask, but you could ask anyway…)

Let’s say you are 99.9% sure you know a black-coffee drinking ticking timebomb, but you are their BFF and there’s no way you’re going to abandon them over a little bit of lunacy.

Or maybe you’ve just met this person and they seem “almost” normal, except for a few glitches here and there, such as random outburst or long periods of being quiet…too quiet.

Well then, to win this psychopath’s favour, it is advisable that you include some of these ultra-bitter ingredients the next time you’re preparing dinner for them:

One guy named Kendall Buhi (of WBZ NewsRadio 1030) tried to put the study to the test, by interviewing black coffee drinkers in Boston.

In addition, he asked one server if there was some truth to the study. Guess what she said – a resounding yes!

Tanya, the Allston based server, confirmed that she had noticed some relationship between black coffee drinkers and strange behavior.

Thankfully, The Study Is Probably Not 100% Accurate

Now, let’s not take findings of the study as the gospel truth. There are a number of issues we have to look into. People don’t always tell the truth about the foods they eat or enjoy. Also, black coffee is not primarily mentioned in the study; coffee comes up as an assumption because of its close relation to bitter foods.

The fact that people were asked to self-report their taste preferences also casts some doubt on this matter. You know very well that it is highly likely that people can easily give false information.

Our Conclusion – Proceed With Caution!

All in all, this is a great topic, and it’s only fair that we have some fun with it. Let’s not be held back by the lack of comprehensive scientific evidence.

But, considering the findings of the study, you might want to exercise some caution when dealing with people who drink black coffee; they are more likely to be psychopaths.  🙂

READ MORE FROM OUR SITE

RETURN TO OUR HOME PAGE