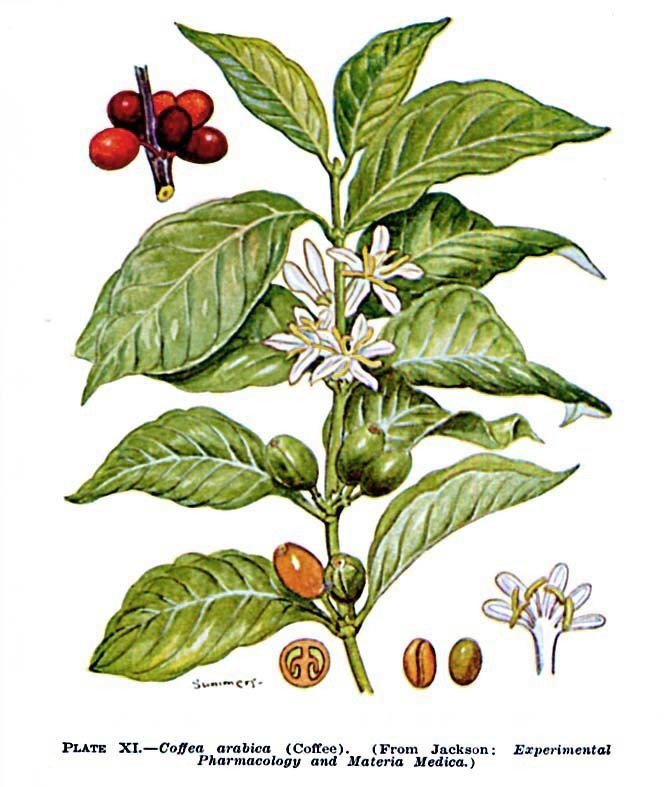 Wild Arabica coffee plants grow up to 40 feet tall, and the branches are an open system.

The elliptic-ovate to oblong leaves are opposite, simple, up to 4.8 inches long, up to 3.2 inches broad, and have glossy dark green colors.

White flowers grow in auxiliary clusters.  The seeds are contained in a drupe, more commonly called, a “cherry”.

The plural form is simply “cherry”—used only when referring to the fruit of the Coffea Arabica plant.

When referring to the actual cherry fruit, the appropriate plural is “cherries”.

It matures to a bright red to purple, and typically contain two seeds which are the coffee seeds.

It all began with a handful of wild coffee plants hundreds of years ago in Africa. Coffee plantations around the world today contain almost no diversity but that wasn’t the case in the beginning.

The genetic variation of Coffea Arabica relies on conserving healthy populations of this wild coffee in the rainforests of Ethiopia where the high altitudes of 1800-3600 feet, and temperatures of 16-24°, are perfect for this plant.

The environmental conditions must be perfect such as a well defined rainy and dry season and the plant grows best in light shade.

The result will be one coffee growing season and one maturation season, usually in the coldest part of autumn.

There are places on Earth that match this environment perfectly like Jamaica, S. Paulo Brazil and Mexico.

C. Arabica takes about seven years to mature fully, and does best with about 40–59 inches of rain, evenly distributed throughout the year. The plant can tolerate low temperatures, but not frost.

Some countries close to the equator with latitudes lower than 10 degrees and altitudes of 3600-6300 feet, have request rainfall which causes continuous flowering and the result is two coffee harvesting seasons.

The drying out stage is effected, thus people have resulted to artificial drying with mechanical dryers.

This change in the natural development of the coffee plant could cause the coffee’s flavor not to be its best. 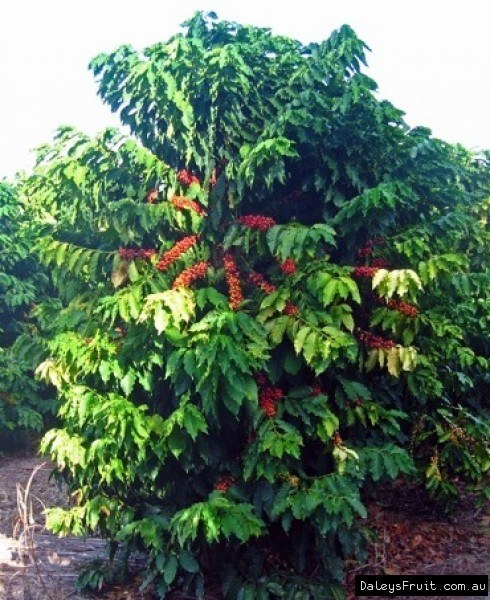 Cultivating coffee could threaten the genetic integrity of the original Arabica coffee by exposing it to cultivars.

Cultivars are a selected breeding of a plant for its color, flower, and form.  Countries that are trying to use these methods on Arabica plants are Kenya, Colombia, and believe it or not, Ethiopia.

Commercial cultivars are frequently trimmed quite low to facilitate harvesting.

This pruning will stop the over flowering of the plant.  The flowers only last a few days, leaving behind only the thick, dark-green leaves.

The berries then begin to appear. The berries change in color from dark green like the foliage to yellow, then light red, and finally to a glossy deep red.

The “cherry” has emerged as is ready for picking. The tiny oblong berries  should be picked by hand because they don’t all ripen at the same time.

The real prize are the beans inside the berries and in the beans are the seeds. 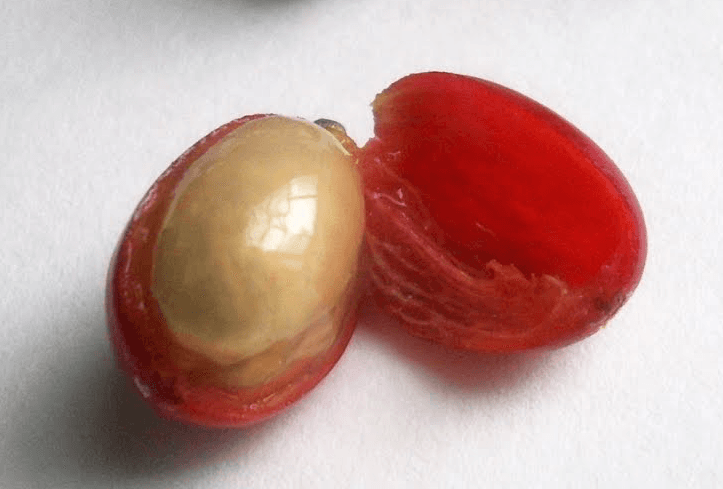 Inside a coffee channel

As you can probably tell, the entire process caring for the Arabica coffee plant, beginning with the cultivation of each tree, to the berry, to the beans, and finally the seeds, is delicate given that each tree has its own personality which changes with the climate of each season.

What is the difference between the Coffee Arabica plant and the Robusta plant? Here is a quick look at the main differences between the two…

Where did the plant known as Coffee Arabica originally come from?

The tale of Kaldi, the goat herder, who discovered coffee, is a classic folktale.

It’s a perfect place to start to explore how Arabica coffee came to be the most widely used coffee bean in the world.

Everyone likes a good story, so let’s begin with Kaldi, our hero, and then we will get down to the real facts about Arabica coffee.

“A south eastern Ethiopian goat herder was caring for his flock in the forests one day when he noticed that his goats were munching on a tree with bright red fruits.

It wasn’t long when the goats seemed to be filled with boundless energy. They were running and jumping and appeared to be having a great time.

Curiosity got the best of Kaldi, so he decided to also try some of the mystery fruits.

Almost instantly, Kaldi was filled with overwhelming energy himself, and he began to dance along with his goats.

A passing monk witnessed the dancing, put two and two together, and brought some of the fruits back to his monastery.

Monks, being very resourceful and intelligent,  soon discovered how the fruit of this local bush could keep them stimulated during long periods of prayer. Coffee was born!”

Note: Antoine de Jussieu the French Naturalist named the coffee bean, Jasminum arabicum,  in 1737, after studying a specimen at length.

The plant was placed in its own genus, “Coffea”. The rest is history.

Since coffee was and is a sociable beverage, the media has always been interested in its evolution.

This is particularly true of the Arabica bean, since it makes up the majority of the world’s coffee.

In terms of its health benefits, sometimes scientific accurate evidence is reported to the public and sometimes the facts are not true at all.

Many favorable and unfavorable characteristics have been appointed to this black drink that today is consumed world wide.

A scientific experiment always has variables that will affect the results and in the case of coffee and humans, so lets hope that coffee-loving scientists can be as unbiased as possible when studying this subject.

Is coffee actually good for us? There are numerous articles online that indicate one way or the other, and the debate rages on to this day…

Let’s try to go back in time and review what we know about this savory Arabica coffee, to the very beginning…

One day they were brought into the province of Kaffa in southwest Ethiopia where the mountains and high plateaus hug the southeastern border of Sudan.

There have been a lot of reports trying to claim the origin of the name “coffee”.

I like the linguist who states that coffee came from the province Kaffa. That sounds reasonable. Let’s move along and talk more about the goats.

It is said that human cultivation of coffee began after the goats in Ethiopia were seen mounting each other after eating the leaves and fruits of the coffee tree.

In Ethiopia, people in some locales still drink an herbal tea made from the leaves of the coffee tree.

The first written record of coffee made from roasted coffee beans comes from Arab scholars, who wrote that it was useful in prolonging their working hours. (Don’t forget the monks!)

This aphrodisiac effect of coffee on humans was reported by a Danish doctor, Simon Pauli, and by the Turks and a French scholar by the name of Dufour published information in 1684, Lyon France, that coffee was used extensively by the nuns and monks in monasteries and convents to promote chastity.

Along came milk to cool the brew off and at the time, milk was thought to be a poison thus cirrhosis of the liver began to show its ugly face in the convents. There was even a term for this called, “convent cirrhosis”.

Back to the history and legend of Arabica coffee. Coffee was brought from Ethiopia to the Middle East around the year 575 and its cultivation began in Yemen near the port town of Mocha.

The Arabs prepared coffee as an infusion in the 8th C. and the practice of drying and roasting began in the 14th C.

Some years later, coffee made its way to the port city of Aden in Yemen by Mufti Gemaleddin Ahout Abdallah.

He had been visiting in Persia (Iran) and returned to Aden sick so decided to drink the coffee infusion for assistance.

It made him light headed and his spirits were lifted. He noticed that it kept him awake so he offered coffee to dervishes who could pray for him late into the night.

As a result, coffee became the most popular drink and it replaced another stupefying beverage known as Kat. 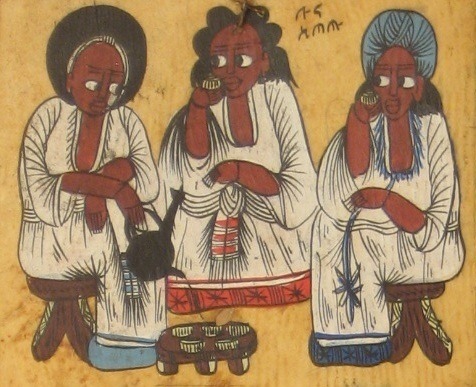 The habit of drinking coffee spread from Aden to Mecca, on to Cairo and Alexandria, continuing to Persia (Iran) and Istanbul in Turkey.

Arab armies introduced this drink into all their conquered countries such as the Balkans, Spain and North Africa.

Even though the European crusaders made no mention of coffee upon their return from the Middle East, it was all the rage in the Arab world so much so that the Arabs tried to control its monopoly.

In 1555, Syrians opened the first two public coffee cafes in Istanbul. Their clientele were poets, scholars, and gamblers.

I think it becomes obvious that coffee was profitable for the business world and its spread around the world was unstoppable.

In 1580, an Italian botanist by the name of Prospero Alpini, studied Egyptian flora and described the coffee tree in his work called, “Plants of Egypt” which was published in Venice in 1592.

He even mentions that the Arabs and Egyptians drink coffee in place of wine. The beverage was called, “caoua”.

In 1615, Venitian merchants imported coffee from Mocha into Europe.

In 1660, the first shipment of coffee from Egypt arrived in Marseille France and their first coffee house opened in 1670.

For a short time, Marseille supplied all of Europe with Arabica coffee.  In 1650 coffee houses sprung up in Oxford England, and in Hamburg Germany in 1677.

North America was already ahead of the Europeans because they were drinking coffee in 1643 in New York City and loving it.

Not only was Coffee arabica popular with the common man but the aristocracy and famous people enjoyed it as well.

It was widespread at the court of Louis XVth. The King was using coffee to induce his lady friends thus its popularity spread through the kingdom.

The start of the 17th C. saw the cultivation of coffee trees moving outside of the Middle East. Dutch merchants imported the trees to Holland in 1616.

It happened in India in 1658 and in Java around 1696. Transplanting coffee trees happened from Amsterdam to Pari in the early 1700’s.

Missionaries and explorers introduced the Arabica to the new world.

At first there was a battle between the coffee and the alcohol consumption. Soldiers were beer drinkers who could withstand the dangerous and harsh conditions of life.

The coffee drinkers were more philosophical and passive but Germany was the largest consumer of coffee in Europe in the 19th C. and now drink more coffee than beer.

In Scandinavia, coffee was taxed highly to keep its use low and its was actually forbidden four times from 1745 to 1799.

At the present, Finland and Sweden are the largest consumers of coffee in the world at 28.6 pounds per capita per year.

From the  very beginning of its use, it was known that coffee consumption had effects on human health.

Today, there are theories both good and bad for coffee drinkers, but lets just say you should watch your intake (no more than 4 cups per day for adults), even with a beverage as tempting and delicious as a fresh cup of coffee Arabica.