This tale is rather extensive, so please use this table of contents to navigate this article.

Have a look at this cool map of the world in the form of coffee beans, where it shows the two main types of beans, Robusta (in red) and Arabica (in green).

This map is basically a creative interpretation of the “Coffee Belt”, which indicates where coffee currently is grown, but it also sheds some light on its origins as well – which is to say, Africa, and more specifically – Ethiopia. 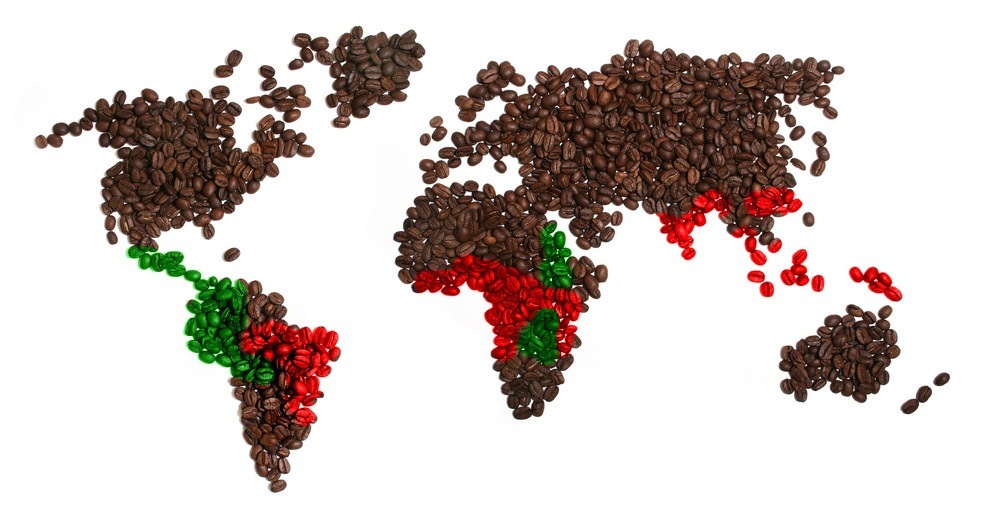 From the time of the ancient Ethiopians, back in 800 A.D., people have been grinding coffee beans into a fine consistency in order to enjoy the delicious drink they discovered.

As you will see in the following video, Ethiopians have a very long and intimate relationship with coffee which is almost a religious experience unto itself, and they know countless ways to prepare it as well.

They even use parts of the coffee plant that most people would never think of using.  Take a look!

To this day, Ethiopians take their coffee very seriously, and even have a ceremony dedicated to coffee, which involves roasting fresh green coffee beans and creating an intoxicating waft of coffee aroma before serving up some of the finest coffee you’ll ever taste.

Here’s a video that explains the ceremony rather well, and will have you wanting to give it a try sometime.

As you can see, Ethiopians clearly love their coffee.

Well, it’s no surprise, as their land was the birthplace of the plant, and continues to generate delicious coffee which is shipped worldwide for our enjoyment.

Origin Story – The Legend Of Kaldi The Goatherd

Maybe you’ve heard this tale and maybe not, but it is looked to as the “origin” story of coffee, and it features a simple goatherd named Kaldi who once lived in Ethiopia in around 800 A.D. and traveled around with his flock of goats.

As the tale goes, Kaldi noticed his goats were acting a little bit more excited than usual one day, as they were dancing and frolicking about.

Putting two and two together, Kaldi noticed they had been munching on some ripe red cherries from a particular plant, which turned out to be the coffee plant. 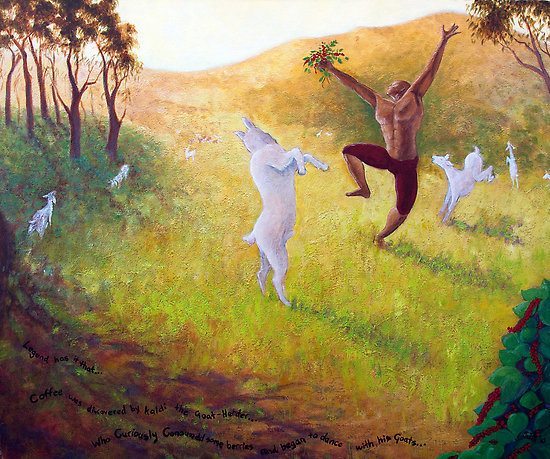 Goats, if you know any, have a habit of eating anything.

Kaldi, deciding if it was good enough for his goats then he may as well try a few, then tried the coffee cherries.

He and his goats danced and frolicked together, having discovered this exuberant new fruit that made their passions roar.

This, of course, was coffee.  In case you missed it in the previous video, here is a brief video showing the Legend of Kaldi.

As that tale continues on, monks, known to be attuned with the divine spirit, took a hint from Kaldi and began sampling the berries. They used them for different purposes, such as a popular coffee-derived wine at the time.

From there, the word was now out that these berries were certainly sensational as can be. They became of the cultural fabric – first in Africa, and then around the globe.

As it turns out, back in days of yore, coffee was treated more like a meal than the delicious beverage it is today.

The ancient Ethiopians would crush up the fresh berries, then wrap it up with fat (not your typical snack here in North America), in order to make it into something edible.

Maybe it was their equivalent of an energy bar, which is not a huge stretch when you think about it.

This makes me wonder, were ancient Ethiopians looking at these as more of a necessity, like lembas bread in Lord Of The Rings? (sorry, I’m a nerd and that’s the only comparison I can think of.)

In case you don’t know what I’m talking about, here’s Frodo and Sam talking about the renowned bread that can sustain you when you’re on a long trek.

Ok, enough about LoTR, I’m wondering… were these coffee snacks which were wrapped in fat meant more for human sustenance, or were they more of a treat?

This coffee history buff can’t say that she knows the correct answer to this question, but it is a curious thing to snack on.

So, when did coffee grinders come about?

Back in this time in Ethiopia (around 800 A.D.), when coffee was starting to find a number of uses, the stone mortar and pestle were the go-to coffee grinders of choice.

It wasn’t long after coffee was discovered as something we could consume in various forms that humans started to experiment with it. Part of that experimentation meant grinding up the coffee cherry seeds, not to mention cooking or roasting them.

Can you imagine being there when the first person discovered what happens when you actually roast coffee beans over a low flame?  Wow!

As these mortar & pestle combos were the primitive versions of coffee grinders back in our history, they were used more out of pragmatism. They had not yet entered their highly decorative phase as you will see. 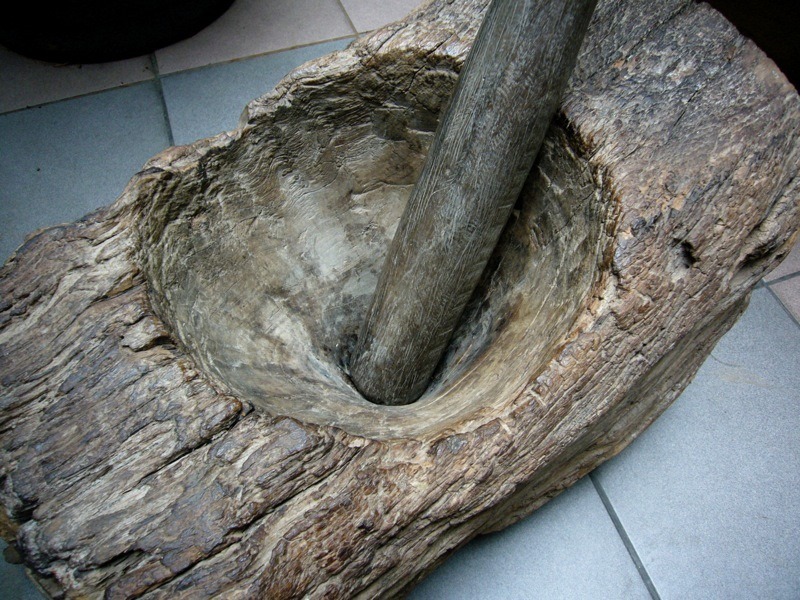 Yet, certain stones or pieces of wood were selected to fulfill their purposes – obviously people must have had their favorites. You might say this was the beginning of “style” when it came to coffee grinders.

Perhaps these objects, used to pulverize coffee for a variety of purposes, were looked upon with great reverence at the time.

Or, perhaps they were no more valuable than a common fork or spoon is today.

One would assume that if coffee had the air of magic about it, that the mortar and pestle must have had some special aura about them as well. 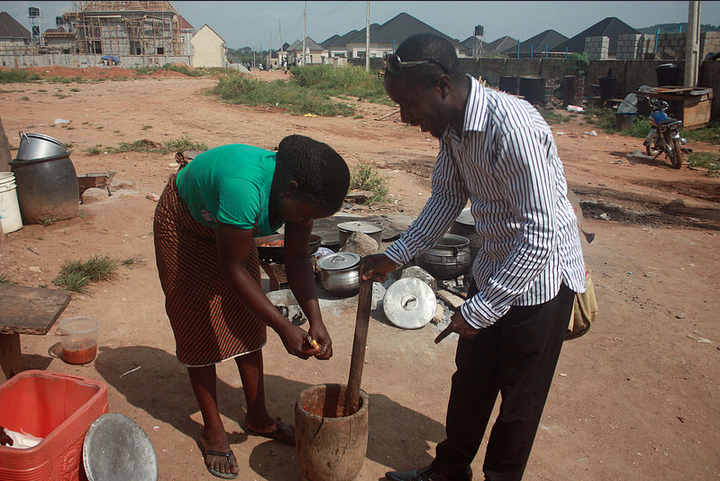 Even up until present day, things like coffee are still crushed by this mortar and pestle method in certain places.

Hey, when it works, it works!

Introduction Of The Coffee Grinder Mill

Taking us back in time much further, the concept of the mill was introduced by the Greeks sometime around 1350 B.C.

To clarify, a mill is defined as a machine that crushes a substance down into a fine powder.

Here is a video showing basically what a mill does.  As the millwright says in this video, “…nothing added, nothing taken away…”

It’s worth watching, because this is how coffee grinders were developed – to be mini mills dedicated to grinding coffee.

As you can see from this video, mills can be rather large, and very powerful.

They operate slowly and regularly, and this is a key point, because it is true with coffee as well.

We don’t want our coffee to be ground up too fast.

In the case of a coffee grinder, we are talking about a small-sized mill, compared to a giant grain mill as seen above.

The first spice grinder was invented in the fifteenth century by either the Turkish people or the Persians – there is still some debate over this.

The Turks, like the Ethiopians, treat coffee with a huge amount of respect.

Coffee is involved in their day-to-day life in a very close way, and it even finds its way into their wedding ceremonies and many other events.

This next video shows you what coffee really means in Turkey, showing off all of their elaborately designed coffee accoutrements.

Also, you can see some of their other coffee rituals, from fortune telling to engagement ceremonies.

This really is a fascinating look at how coffee factors into an entirely different cultural experience in this place.

If you’ve been to Turkey, you’ll know how beautiful the country is.

They have a love for very ornate and beautiful objects, with a lot of unique design work and attention to detail – just look around Istanbul and you can see it is a feast for the senses.

Interestingly, it is this appreciation of aesthetic beauty that sees certain design elements finding their way into the world of coffee, and, specifically, grinders.

The Turks, we shall say, invented a type of grinder that was no doubt used for both coffee and spices (as Turkey is well known for both), and have a certain lavishness to it. 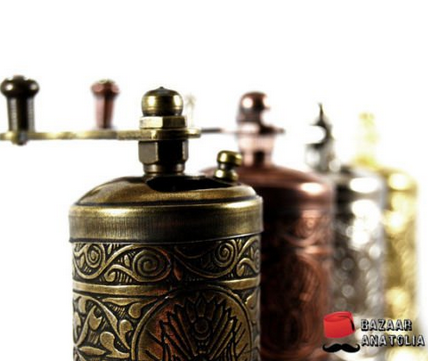 These grinders were (and still are) stunningly made. They are sold around the world, with many copycats trying to capture authentic Turkish and Persian design elements, which have now been around for hundreds of years.

They also innovated the design as well.

One example of such a design improvement is that they were able to design the tall, cylindrical coffee grinders we see everywhere now today. They introduced a functional grind receptacle, as well as other new types of handles and hidden pockets.

This was also around the same time that Middle Eastern kitchens were being updated to include such things as coffee bean-roasting braziers, which would slow roast beans over a flame and be ornately designed as well.

Not only this, but large, elaborately decorated and hand-crafted Turkish serving sets began to appear, and soon, between the coffee & spice grinders, their unique serving sets, and the coffee pots, coffee is very much “their” drink.

At this point, we shift our focus over to the western Europe and move ahead about 200 years.

In the year 1665, a man by the name of Nicholas Book, from England, claimed to sell the only coffee mill which was specifically designed for grinding coffee.

A bold claim, to be sure, but it certainly lends credence to the fact that coffee has, by now, spread throughout different parts of the world, becoming popular nearly wherever it goes, and this includes England by the 17th century.

In 1722, the “London coffee man”, Humphrey Broadbent, made the pronouncement that “…most persons of distinction in Holland roast their own berries.”

Also, he was quoted as recommending every family roast their own coffee berries, to avoid certain pitfalls that befall those who don’t do this, such as burnt berries.

Clearly, coffee shop hipster-ism was beginning to take hold even then.

Since I have already failed any sort of brevity in this article, I could simply just continue…BUT, I will conclude this history of coffee grinders now, before I continue any further.

Will there be a sequel to this?  There very well could be, since we’ve only barely just arrived in the 18th century, and there are three more centuries to cover.

Edited to Continue the History…

We couldn’t leave this unfinished any longer. 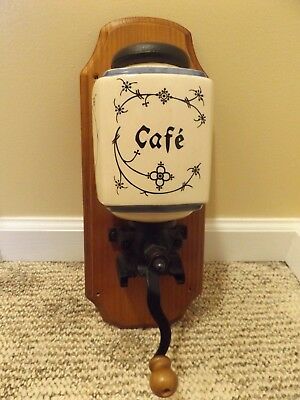 US Contributions to the Coffee Grinder

Finally, we come to the United States in coffee grinder history. The first U.S. patent for a grinder was issued to Thomas Bruff. He was a dentist living in Maryland. Here’s a fun fact; he was Thomas Jefferson’s dentist.

This dentist figured out that coarse and fine teeth in the grinder would crush coffee beans. It is not hard to imagine that his occupation was the light bulb needed to come to his invention.

There were other inventors over the course of history to have an impact on grinders. Charles Parker of Connecticut was contracted to improve on the existing design. That was in 1828.

In 1870, the “Champion #1” was patented. It eventually became the grinder used in most groceries.

These were all the US manual grinders.

It wasn’t until 1898 that Hobart Manufacturing Company brought about the first belt grinder. It was the first device that used electricity.

After using the current grinder design of the time, he brought about improvements. In 1913, he applied for a patent for a grinder with teeth powered by electricity. (That certainly sounds a bit scary!)

How To Date Your Antique Coffee Grinder