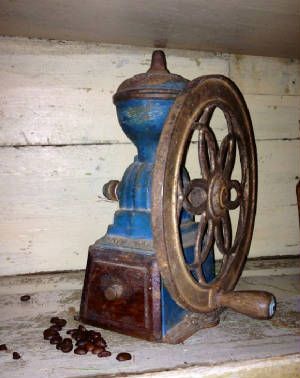 Yes, it’s the emblem for the French company Peugeot, who are best known for making innovative and boundary-pushing products like this… 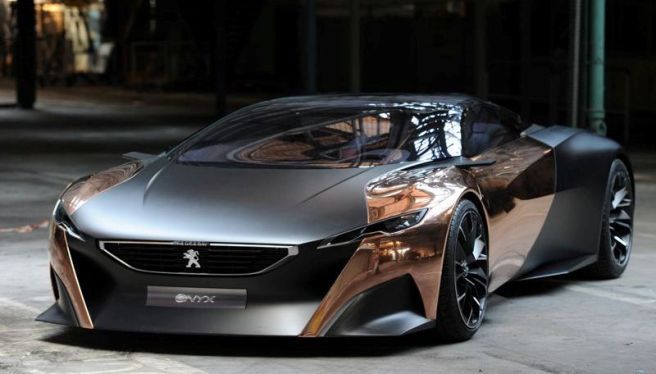 That sleek motor vehicle is the most impressive Peugeot Onyx, a state-of-the-art “concept car” that came out back in 2012, and is one of the most ground-breaking vehicles on the market today, using innovative materials and technologies to make it operate.

Here is a video of the Peugeot Onyx in action… 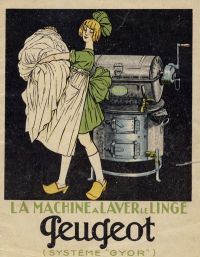 The family Peugeot has been making things for the past 200 years now, starting with founding father Jean-Pierre (b. 1734) who established a grain mill and an oil mill (these mills are highly relevant to this article as it pertains to the history of coffee grinding, just you wait), as well as weaving and dye works.

The Peugeot lineage continued to thrive, and in 1810, brothers Jean-Pierre II and Jean-Frédéric, founded Peugeot Frères, which began their engineering legacy that continues to this day.

Cars were but one of the many things that Peugeot has produced over the decades, with Armand Peugeot making his foray into the automotive industry in the late 1800’s with a vehicle such as the one below, the Type 15.

With every new “type”, changes were made to these new machines in order to make them more user-friendly.  As with many new technologies, there were technical obstacles to overcome and designing one of the first efficient automobiles was no exception. 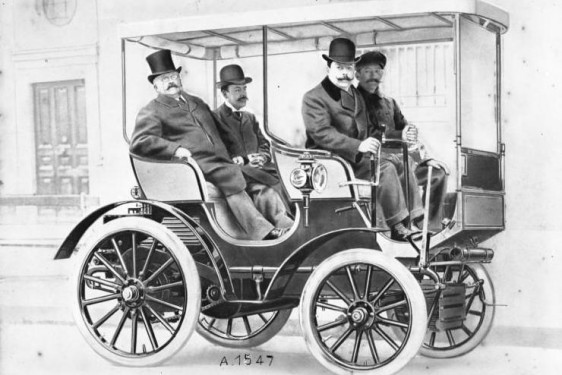 Back in the early 1800’s, brothers Jean-Pierre II and Jean-Frédéric took their father’s grain mill in Valentigney, Montbéliard, Franche-Comté and transformed it into a steel foundry, where they made products as diverse as saws, springs, umbrella frames, as well as pepper and coffee grinders.

The Valentigney region in Eastern France is where the Peugeot brothers made their mark, and they began patenting and developing their ingenious inventions such as their renowned pepper grinder in 1842, among a host of other diverse creations that were meant to improve the overall quality of life.  As the Peugeot website states in its company history section, “The spirit of innovation had been born!”

This region in France must have something special in the drinking water to foster such creativity, and, as it turns out, many Peugeot descendants still live in that very spot. 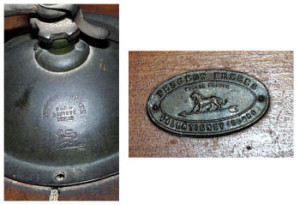 Above and on the right is one of the larger models of coffee grinders that was produced in the 1800’s (the big blue beast), a dovetail cast iron coffee mill.

As you can imagine, this would have been quite a sight back in its day, but wear and tear over the many decades has taken its toll on it.  However, as you can see, it’s still intact, and probably could still grind a mean cup of coffee to this day!  We’re not suggesting it isn’t a lovely piece of coffee-grinding technology – all things considered, it has held up very well.

Speaking of longevity, here is a video dated 2015 which shows an old 19th century antique Peugeot coffee mill making a cup of coffee – accept no substitutes when it comes to quality, folks!  Here we have further proof that antique items are not just for show, especially when the craftsmanship is exemplary as it is here.

What About The Turks? 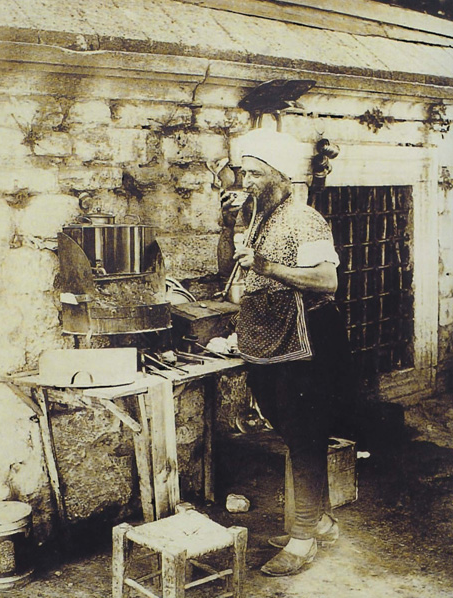 It is well-known that Turkish people have a long and storied history when it comes to coffee.

In Turkey, coffee making and drinking dates back to the 16th century, which was back in the days in the Ottoman Empire, when Istanbul was known as Constantinople.

Ask anyone – Turkish people love their coffee!  It is part of the fabric of their life and tied in with many of their intimate rituals (eg. courting) that many would argue makes North American coffee drinking seem more like a mild infatuation.

Why do we bring up the Turks all of the sudden?  What happened to the Peugeots? 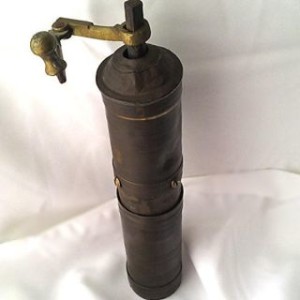 We mention the Turks here simply because of the curious fact that Turkish folk have their own types of coffee grinders that makes coffee the “Turkish” way, dating back centuries, which are considered by some to be highly innovative in their own rite (see our article on Turkish coffee grinding here) The way Turks sometimes look at it, “Turkish” style coffee is just the way you make coffee, period.

To us, this notion of Turks having pioneered their own coffee revolution raises the question, what was it about the Peugeot model of coffee grinders that came along in the mid-1800s that made them especially innovative?  Through the centuries, Turks have been using their own coffee and spice mills, so what did the Peugeot brothers do to add their special magic to the coffee grinder itself? 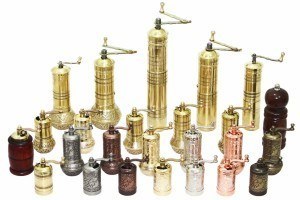 With Peugeot, it was grinding pepper, whereas Turkey is a land of many spices and many of their grinders are considered to be coffee & spice grinders.

In Turkey, having so many spices they like to grind at any given time, this requires a strong material which grinds coffee beans effectively, but also appeals to their sense of beauty and decoration, which is where both copper and bronze come into play, being both strong yet possessing highly decorative qualities as well.

Copper, for instance, is a strong, naturally occurring substance which can be made into all varieties of shapes and sizes, while still being extremely durable.  This explains the ornateness of some Turkish coffee products made from copper – they are very beautiful, but very tough as well. 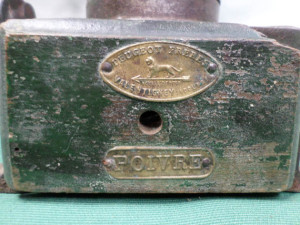 With Peugeot, they initially started off with the creation of a steel foundry, where steel is produced and molded, which eventually became the hub of some of their most popular creations.  Speaking about steel as a metal and as a material with which to design coffee-grinding burrs (or teeth), although it is an alloy, meaning a combination of substances, steel is widely known for its strength and durability overall.

As we mentioned earlier, Peugeot came from a milling background of grain and oil.

Grains, as well as oil-bearing seeds can be tough as nails, so to speak, which requires a milling / grinding device which can handle the job of crushing them effectively.  As the Peugeot brothers continued to innovate and create over the decades, it seems only natural that they developed mills that were suitable for crushing things like coffee beans and peppercorns; steel being perhaps the ideal material to create a mill in order to grind each of these things. 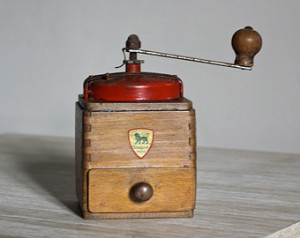 Combining practical elements with a certain flair for design seems to have always been one of Peugeot’s strengths as an innovative manufacturing company with a diverse range of products.  That’s not to say they haven’t had their low points, but they always seem to bounce back.

When it comes to grinders, you can see from this antique Peugeot coffee mill to the left that this isn’t a far stretch from many of the modern coffee mills on the market today. In fact, this hundred year old model could actually pass for a cool retro coffee mill by today’s standards, and it would not seem out of place at all. 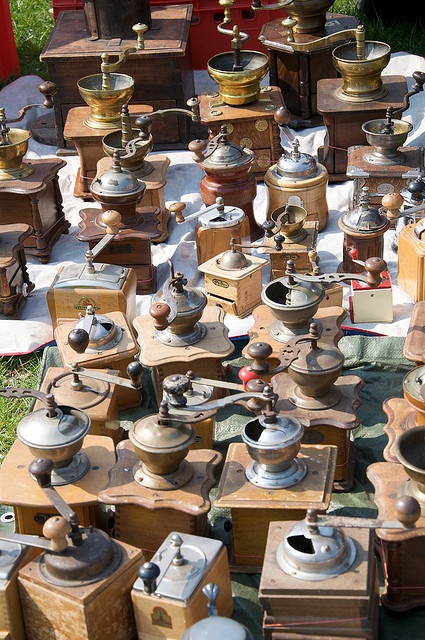 We think it would be fair to say that in addition to basically perfecting what has become the standard steel burr configuration that is used in most burr grinders today, Peugeot also had a big influence on the look of many modern antique-looking coffee mills that are available today.

Of course, we are open to hearing any counter-arguments to our claims that we’ve made here, but we feel that our basis in these claims is quite sound when it comes to Peugeot and their influence on coffee grinders and coffee culture in general.

Not to mention that regardless of our trip down memory lane, Peugeot is very much alive and well today and continues to innovate and inspire to this day.

We are, however, glad to be able to take a look at what many people may be overlooking when it comes to their favourite coffee mills of today.

The Peugeot legacy is still very much felt right up to this day, and thank goodness for innovators like them!